So Dave pointed me in the direction of a bizarre facebook page for ‘BOTTLES N CHAINS’ that’s using the BnC logo and posting photos of people wearing sandals on motorbikes and rows of those funny little cars that grandmas drive. After a bit of a chuckle I thought that maybe I should make a proper BnC FB page, just so that it was reserved for good old fashioned bicycles and beer. Unfortunately someone else had already decided to take the name/address and grace it with a sweet ‘BOTTLES AND CHAINS CREW’ logo, featuring a gnarly dude doing a sweet jump against what I can only imagine is the moon at some point in the future, after BnC’s global corporate buying power has conspired to have the BnC logo etched onto it in a size clearly visible from earth. I looked a bit closed and discovered a bunch of Romanians living in Transylvania riding full rigid mountain bikes in jeans. That’s more like it!

I know we happily suggest that people join up by stealing the logo and claiming it, but the third stipulation of that agreement is to not be a jerk. I’m not sure I’d actually expected random people to just make off with the logo and use it for their own nefarious ends (and lines of parallel-parked micro hatchbacks definitely classes as nefarious in my book). But now it’s happened we’re just going to have to take them under our collective BnC wing and welcome them to the family. I’m really not sure they know what they’re in for. Anyone up for a holiday to Transylvania? I know some guys there and I’m sure they’ve got some room on the floor.

Except there will be a new rule this year,  for those who are not drinking.

Just gonna chuck this up as well, because it’s worth a look. A bunch of shots and some words up on Pink Bike from rider/photographer Sean Lee’s recent time in Queenstown. He was shooting a bunch of lads from Tassie, a few of the Skyline crew, and a good lot of Queenstown blow-ins. Be prepared to be jealous… 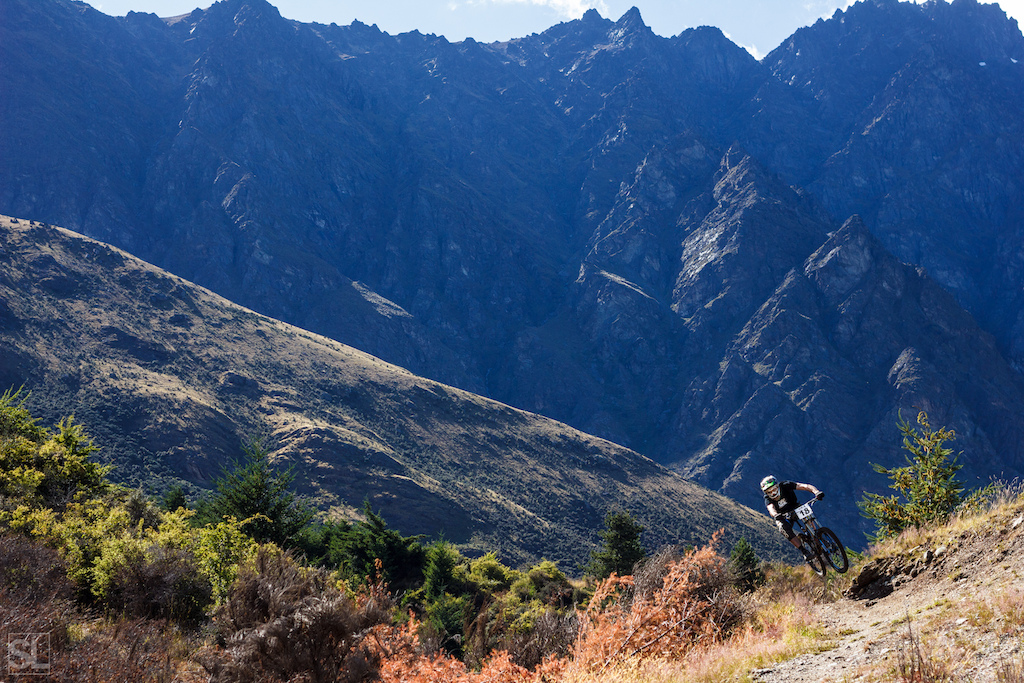 Nothing feels quite like finishing a 100km race…I’d imagine. I’ve never done more than 50km, but I’m notoriously lazy and strictly non-competitive unless I’m guaranteed to win with minimal effort. The good doctor Jimmy ticked off a century today and he’s got the grit-filled grin to show it. Nice work ol’ boy.

As for me, I took to the hills after too many days riding the gondola and forgetting what it feels like to actually pedal up a hill for longer than three minutes. Within 30 seconds of leaving the house I’d been attacked by a bee, we’d lost Michelle, and Neil couldn’t figure out how to use the gears on his borrowed bike with its big, silly wheels. After moments of chaos we regrouped at the supermarket to meet up with our guide Nick, who was still drunk from many hours of debauchery the night before. Things were off to a good start.

A few KM of tarmac had me quietly cursing my tacky 2.4″ tyres and feeling less than confident about the backcountry mission ahead. Luckily it wasn’t too long before we hit dirt, and Nick seemed to be vaguely aware of where we were heading. Many rides with Ben Storer has left me eternally wary of the words “I’m pretty sure it’s this way…”, which are inevitably followed by a long, steep descent towards a dead end and a sentence starting with “Oh, actually…”.  We hit singletrack in good time, and from there things were looking up…literally.

Moonlight Track winds its way above the Shotover River behind Queenstown, with some pretty steep drops off to the side and a narrow path that would be little more than a goat track if it weren’t for all the mountain bike tyres that roll over it. It kinda goes without saying that the mountain biking in Queenstown is pretty epic, and the views are best described the same. When you duck around the side of the hill and find yourself away from the main roads, the mountains open up before you and it’s hard not to drop your jaw. The trail dipped into an awesome descent, with the only real line becoming a narrow rut intersected by jutting rocks and covered in a good dose of sheep shit. Guaranteed that whenever the line did open up, your chosen path would have been neatly defecated on by the local farm animals. Just roll on through, it’s the only real option. We hooked down and back up again, before a brief stop for photos and jelly beans (any excuse to rest is good by me). Naturally things were going to smoothly, so Neil decided that a spontaneous puncture would liven things up a little. I promptly planted myself in the shade under a bush and didn’t complain a bit.

We carried on along more narrow, technical trail before hitting 4WD road and beginning to loop back towards Moke Lake. A few steep climbs in the hot sun had me swearing and whinging inside my head. If there’s one thing I hate whilst mountain biking, it’s riding up long, dusty fire trails in the hot sun. Luckily the ride was far too good and the scenery too amazing for it to have any impact on the good times. Plenty of pedalling and a relaxing lunch under the trees lead us on to Moke Lake, where more gravel road carried us on to the top of Gold Digger trail. Queenstown Mountain Bike Club do a lot of amazing trail work, and Gold Digger is one of their newer projects. A rad 2.5km descent back towards town, winding its way through a variety of terrain and flora. Plenty of tight corners (in a good way), sections of fast, pumpy trail and some awesome surrounds make it a damn fine trail that I’m super keen to ride again.

From there it was back to town along the Sunshine Bay track, before booking in for a bloody huge stone grill steak at Pog Mahones. Safe to say there was a fair amount of red meat ingested at that table. A decent cow somewhere gave its life for a damn good cause.

The question now it, where to next?

(I totally stole Jimmy and Michelle’s photos for this post.)

I was wandering around on Tumblr this evening when this picture cropped up. Featuring the pretty much instantly recognisable Remarkables it can only be Queenstown. There was no link to the source, so I have no idea who took it, or where it’s from, or anything at all really. I don’t even have much reason for posting it, except that it’s someone busting out a skid in a sweet location…which is reason enough really! Queenstown’s a bloody good spot. I’d better find a new front tyre for my fixie so I can hang with the cool kids again. Here’s a video that gets me absolutely stoked on life. One that serves as a reminder of the pure joys of riding. I’m sure Ben and the other BnC dad crew will appreciate it.

I love the attitude that kids can have towards doing fun stuff. I was working at the ski fields over winter and the groups of stoked kids in ski school would always leave me feeling good about life. I remember one tiny kid ending up going backwards down the run and it was the greatest thing that had ever happened to him. He busted out the hugest grin, then started laughing uncontrollably and yelling “I’m going backwards! Look at me going backwards! THIS IS THE BEST THING EVER!” at the top of his lungs. Thinking about it now still brings a huge smile to my face.

I’m working with the MTB crew at the gondola in Queenstown this Summer and already there are kids heading up the hill with their mums and dads, getting amped on mountain biking early in life. There are kids who are riding bikes too small to hang on the gondola cabin bike hooks, yet they’re still out there riding the trails and having a mad time.

I can sometimes get a bit grumpy with myself when I’m riding, especially if I’m not feeling as smooth or confident as I like. I think it’s at those times that it’s worth considering videos like this and just remembering to just enjoy being on a bike, ’cause it’s bloody rad.

Check out this Rapha video from a recent CX race Melburn-side, featuring a cameo appearance by Neil, BnC’s resident pain-merchant. Just try not to get distracted by those big ol’ hands.

I have to admit, I get a little tired of the endless parade of mountain bike films with ponderous narratives talking about the journey and the connection and the trail. They’re generally accompanied by obnoxious soundtracks and a bunch of guys doing huge tricks that are a little hard to relate to when you struggle to clear a 3′ tabletop. The self-styled kings of the extreme world, Redbull, are about to release another one of these slick-as-black-ice epic-fests called Where The Trail Ends. That’s generally the point where I admit to myself I’m lost and turn around to try find my way home, but apparently these guys get into boats or helicopters and go camping. Here’s a bit of a behind the scenes look at it all. I’m sure it’ll be a good watch, but will it really be anything new? We can only hope.

Personally, I want more mountain bike films about trail riding and epic adventures that don’t require a hundred sponsors and an open account with the local helicopter pilot. Mountain bike films that reflect what riding is about for the average rider who’s hitting trails on the weekend, or exploring their extended backyards with their mates. Maybe something a little less extreme?

Wow, tomorrow we celebrate the two month anniversary of no-posts-on-BnC. I know plenty of you lot are out turning pedals and taking in the sights, so feel free to mail in with tales and pictures and other stuff that we can use to fill this gaping hole of a website!

Tomorrow sees me start a new summer job in Queenstown, working with the Skyline Gondola mountain bike crew. I’m hoping that’ll mean plenty of bike action over summer and hopefully there will be something to kick things along around here. What I’d really love is to be wandering off into the mountains on a bike with drop bars and knobby tyres, but I think instead I’ll have to spend all summer saving my pennies and sessioning the bike park…it’s a rough life.

So yeah, write in and tell us your tales. We need the entertainment.