The whole thing about breakfast being the best way to start a good day is completely true. Which is why I’m sitting here at 2:30 on a Tuesday afternoon, having not yet eaten breakfast or even showered. Safe to say, it’s probably not going to be a brilliant day, but that’s to be expected given the looming presence of my upcoming four hour shift at a supermarket. Fun times? I think not.

When breakfast actually happens, there’s one thing that guarantees a good start in winter. Porridge.

Hot porridge. Creamy milk. Spoonfuls of brown sugar that melt into a glorious syrup. When the winter cold really sets in, it’s guaranteed to get your belly full and your body warm. Can’t beat it.

Summer time’s a different story, but you’ll have to wait a little while for that recommendation.

So apparently the greatest threat on the road these days is cyclists. They’ll come from no-where, kill innocent pedestrians and other road users whilst under the influence, and then flee the scene. Oh wait, no, I’m a little confused.

The Victoria Police have decided that the Melbourne’s infamous Hell Ride is worthy of monitoring from the air. A single tragic incident last year that resulted in the death of a pedestrian is apparently a sign that a group of cyclists is the most dangerous thing on the road these days. Never mind the number of cyclists killed by aggressive and inattentive drivers every year, or the disgusting attitude towards anyone on a bicycle that tends to exist amongst many stressed-out road users. Surely there are one or two better things that the man-power could be turned towards? I guess not.

Best of luck to them picking a kit-clad cyclist out of a line-up from 300m in the air.

A quiet few days here at BnC HQ since ‘le Tour’ has kicked off. Life pretty much involves waking up, going to work, watching a bike race, going to sleep…rinse and repeat. Not much riding bar the short commutes to work, but I guess there’ll be weeks like that (hopefully not too many).

Melburn-Roobaix was on the weekend, but being stuck on a small island several hundred kilometres south on the venue meant we couldn’t attend. Probably saved a hefty dentist bill after having our teeth rattled out, so we’ll look on the bright side! Hopefully Andy’s computing machine will recover soon and we’ll be able to see a ride report.

Ever get the feeling you’re about to get hurt?

A trip to pick up some track bars from an ex-track cyclist in the north of the state on the weekend ended up with a conversation about the heyday of track cycling during the late 60s and early 70s at Launceston’s York Park. Every Friday night there would be up to 250 cyclists cramming in to watch and race, or so the story goes.

The more hardcore racers would compete in the six-day race, which made for white-knuckled racing on the less-than-perfect velodrome at York Park. In the first year of the ‘six’, in 1961, over 50,000 spectators came to the raceway over the six days to watch the action. 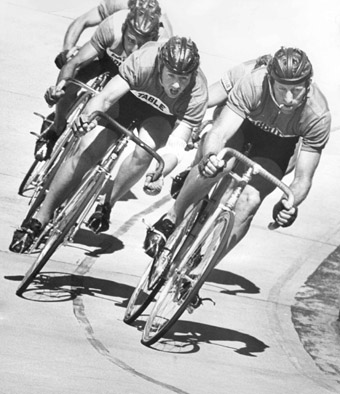 “It was so flat, very difficult to get round on the corners and it was a small track. It just wasn’t banked enough. There were sparks all the time from where you would clip your pedals on the banks. The pedal clipping on the inside was spectacular for the spectators because nearly everyone could do it, not intentionally.

“The other [problem] was the back wheel skipping coming out of the finishing bend. Unless you knew exactly how to ride it the back wheel would always skip.”
– Joe Ciavolo

Racing ended at York Park in 1972. I wonder where the bikes that were involved in the epic races of three decades past are now?

Quote and image from The Licorice Gallery.

More words. It’s not quite the same as being on a bike, but it’s a good thing regardless.

As if you need any help to get into the mood for the Tour, read a little about pain. I’ll be the first to admit Rapha’s offerings make me reach for my wallet before sighing at the all-too-obvious realisation that I’ll have to go a few weeks without eating if I ever want to afford anything from them. Reading their website will have to sate my appetite for now, as it has since I discovered it.

Cyclists and fans across the world are getting excited for the big one. I know my next three weeks are going to be filled with late night city rides followed by a few hours in front of SBS. Nothing inspires quite like watching someone else suffer through it all and come out victorious. Let’s hope it’s as clean as a mid-winter night with the stars open above and the city empty before your wheels.

I began to feel that myself plus the bicycle equaled myself plus the world, upon whose spinning wheel we must all earn to ride, or fall into the sluiceways of oblivion and despair. That which made me succeed with the bicycle was precisely what had gained me a measure of success in life — it was the hardihood of spirit that led me to begin, the persistence of will that held me to my task, and the patience that was willing to begin again when the last stroke had failed. And so I found high moral uses in the bicycle and can commend it as a teacher without pulpit or creed. She who succeeds in gaining the mastery of the bicycle will gain the mastery of life.

When I see an adult on a bicycle, I do not despair for the future of the human race.

Life is like riding a bicycle. To keep your balance you must keep moving.

Photo: Out the back door at BnC HQ

I don’t mind a bit of rain, it makes for nice scenery and keeps things interesting. It’s also great when you can sit in front of the heater and listen to it on a tin roof. Pity it can make for a nasty bike ride.

When it comes to bikes (and all things in general), we’re pretty positive here at BnC. No elitism, no arrogance, just a pure, passionate love of anything with two wheels and pedals. If you’re riding it, we like it. That said, there’s nothing wrong at chuckling at a bit of light-hearted digging.

On a more positive note, the articles over at Old Skool Track have been putting a grin on my face and getting my feet itching for pedals. Lots of musings and writings on the joy of riding fixed, and a love of bikes in general. Go and have a look, it’ll inspire you, I promise.